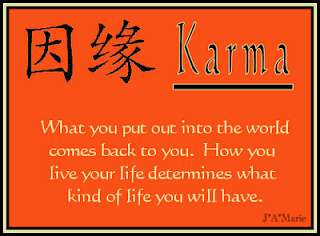 Karma can be a frightening word. It can be so...if looked upon in two ways:
1.) from a religious stance that includes punishment from an outside source.
2.) from a viewpoint of a world based solely on cause and effect -- without recognizing that man has free will and the power to create his own reality.

Unfortunately, many people who became turned off by organized religion, merely substituted karma as a newly revised way of looking at punishment from God. Instead of saying "God's gonna getcha!" ...it turned into "Karma will getcha!" ... not too much of an improvement, in my opinion. One is as fear-based as the other. Not the best reason to be motivated to do --or not do something.

According to the Universal Law of Attraction, we DO attract into our lives that which we give out. So is the Law of Attraction any better than a punishment-wielding god? I think so. Part of our misunderstanding deals with the fact that what we are really 'giving out' are our vibrations. It's the frequency we are emitting when we are 1) doing 2) saying, or 3) thinking. That is what 'counts'--not necessarily the 1) deed, 2) spoken word, or 3) thought.
That is what Jesus was talking about when he was telling a group: 'even though you speak with the tongues of angels, and have not LOVE in your heart, your words are but as tinkling brass." Noise. Don't mean a thing, so we can expect the same kind of vibration BACK as we PUT OUT. The vibrations/ frequencies can come in any kind of form...human or circumstance. When we find ourselves in the midst of bad vibrations...this gives us the grand and glorious opportunity to learn to say 'no'...or politely excuse oneself from those vibrations. I just recently re-learned that. Again.

Is it any wonder why Abe keeps preaching the same ol' song and dance?? FEEL GOOD!! Stay in Alignment. Let go of hatred, resentment, blame... Keep reaching for the better thoughts, enjoy and milk the good times for all they are worth, accept 'what is' but don't ever think you have to 'stay there.' Take care of yourself by keeping in the best alignment you can muster up...and that way...one helps others.

All the great teachers do not look upon karma as 'punishment' from which their is no escape. I was looking at some books in Capitol Hill Second Hand Book Store today and came across a phrase by the Buddha. This is paraphrased, but close enough..." Letting go of the hatred of a situation will allow karma to dissolve." And I thought...wow!.... Smart man, the Buddha.

Don't be a martyr unless you enjoy being one. Don't 'do good deeds' in hopes of building up 'good karma' unless you actually enjoy what you are doing. If we enjoy it, vibrationally we will 'receive back' all kinds of good stuff that makes you feel good. Just don't always expect to get it back from the same person you are giving whatever...to. That is where a lot of disappointment may come in. Just LOOK at all I have done for you, and that is how you repay me!

Seth tells us that if we insist on stubbornly believing in the stereotypical version of karma; if we strongly believe that we must be punished for some misdeed, we will not find ourselves disappointed. Our beliefs have created our reality. We create our reality (if one wishes to believe that or not.) Eventually, we learn, we all evolve, we all expand our consciousness... the rate at which we do so is up to us.... although 'we never get it all done'...or we really would be dead. Perfection is 'death'...it's all over. No more growth. Now that's not a fun thought.

Cause and Effect is what is called a Root Assumption in this 3D reality. We experience our time in a Linear fashion...another Root Assumption. Before we become Aware; before we Awaken spiritually, we will have experiences that will always validate those Root Assumptions. Put your hand in the fire and it will burn...for a long 'time.' Once we learn to become consciously aware...we will (ideally) not pull that stunt off again. As simple as that analogy is...it applies to all of life. Even the complexities. Eventually we learn we can heal / change the past from the PRESENT...because the Point of Power is always IN The Present. That was the basis for Eckhart Tolle's book, The Power of Now.

Often, we decide, before a new incarnations, what we feel we need to experience in order to keep expanding and broaden the scope of our self-empowerment. This may even include some difficult and challenging happenings in a particular lifetime... but it is NOT punishment! It is for gaining understanding. Ironically, we get to think of it in any way that we want...but eventually we learn to accept that WE ARE the creators.

There is a saying (by some wise guy...I do mean 'wise' :) that until we learn to love ourselves, we can never love anyone else. We don't have to EARN the right to love ourselves by loving others.

If people insist upon believing the only reason people 'behave' is because they fear the consequences of karma, punishment, or 'getting caught' ... it means they have no faith in humanity. Which means: they have no faith in their own innate goodness. Which means they will continue to have problems....which isn't much fun to hear or accept...but, alas and alack...tiz true. Good ol' America has more Laws than any other country... and guess what?...we also have more crime than any other country.

Karma is about learning...not punishment. To think of karma as nothing but punishment indicates one has not accepted responsibility for his or her role in what one is experiencing. Sometimes it's all very difficult to comprehend or believe...or accept. And, there may be instances of when we simply have to let go of being able to understand why certain things happen to us. I am learning, however, that those instances are actually more rare than common. I have taken many an offbeat path in my learning before I found genuine humility and allowing in order to 'see' what kind of frequencies or vibrations I myself was putting out -- which invited those 'unexpected' events into my life....Being willing to let go of the concept that Karma is punishment...indicates we are willing to let go of Blame. Letting Go of Blame means...guess what!?... we will find we have so much less to blame! Funny how that works. It's SO good that it does work that way!!

"What you vibrate into the world comes back to you.
How you vibrate your life determines what kind of
life you will have."