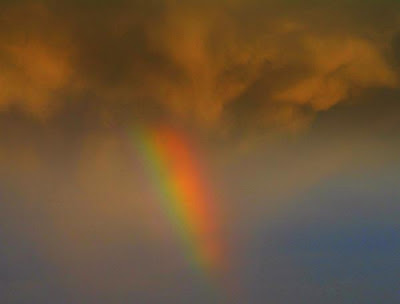 Are we, in the U.S. in for a revolution? Will the entire world be in for a big change that could be called a revolution? Is there really anything valid about any of the predictions connected with the year 2012?

To not notice how time is speeding up, to say that no changes are taking place right now pretty well implies one has got to be living under a rock. Maybe, for some, the name of this rock is 'denial' --which could easily be prompted by fear of any kind of drastic change. Even those with their heads in the sand will be experiencing those sands shifting...

For those who insist upon a more scientific bend to everything ... there is plenty of information to be found about how the earth (and rest of the universe) cycles. Instead of 'slowing down' at the end of each cycle -- it is more like Einstein described it: "Watching a (old fashioned as it be) cassette tape nearing its end, it spins faster and faster even though we hear/ perceive what we are listening to at the same speed...like we experience our calendar days and the hours on our clocks." Its all about expansion. Consciousness expanding. Its happening whether we 'want it to' or not. Nothing remains static. All is Energy and Everything is in constant motion. Even when we seem to be 'stuck'...we are making that choice as to whether or not we believe that we are ... This can also be used as an analogy as to how each of us, individually views that target year: 2012.

How this new magically numbered year is viewed. varies anywhere from the belief that the 'saved' will be raptured...to..."I don't believe in any of that 2012 crap..." I believe most people are somewhere inbetween.

As to what will be happening on a Mass Consciousness level -- no one can say. For us, personally, it will depend upon our own individual mind sets as to which of the mass events we will be observing or participating in. There will not be a 'right' or 'wrong' label tacked to any of these events. Absolutely everything is experience in consciousness that perpetually expands our learning of: 'what its all about'... So, in actuality, to look at anyone's life and say "What a waste" is ludicrous. That would only be our fear-based judgmental ego/mind talking.

Like Seth, Abraham, and other great teachers -- 'karma' is not looked upon as punishment....but as the soul's self-chosen experience --in order to expand one's own consciousness and be free from the addictive binding of judgment...We all, on a soul level, want to learn to truly be aligned with Unconditional Love: which inclues a compassionate Allowing for whatever path anyone else has chosen.

It's not only the notorious Phelps family (Westboro Baptist Church) that thinks they are the only ones "God" favors and have the corner on "the truth."... My OWN reaction to them (and other 'bad people' that I tend to think are SO 'wrong') shows me that the more I cling to and bask in my own 'right opinion'... the farther away I am from my own alignment with Source, All That Is, Spirit, etc... This doesn't mean you have to approve of or embrace anyone else's life style...but to learn to tend to ourselves ... our own enlightenment... should be what we focus on...not expecting the rest of the world to 'be the way we think it should be.' Allowing simply means: Let It Be... when you do take a "stand" it must be a positive and peaceful one.

Do I hear "Yeah, but's!!" ? Sometimes I hear my own thoughts/voice wanting to defend an angry or self-righteous position. It's easy to forget We CREATE those 'yeah but' events ... and the more attention and focus we give to what WE DO NOT LIKE or WANT ...the more of it we will experience in our lives. That is the irrefutable Law of Attraction. That is Universal Law. People who are forever looking to put 'the other side' down, ready to argue to defend themselves--are victims of their own scared-silly EGOs ... the part of the Ego that is never, ever satisfied but demands more and more of 'being right'.

What I like seeing about the Occupy Wall Street Protestors is that they know what they WANT...not just 'what they are against'...and, for the most part, they seem like a happy bunch. Lets hope the government doesn't install some trouble-making 'plants' in the groups to cause problems... Keep picturing a White Light around them when you think of them. There is nothing wrong with 'revolution' ... as long as its peaceful and not violent. And this can be done. Ghandi showed us that.

An idea from a book I read suggested: For just ONE DAY...do your best, all day long, to observe your thoughts. If you think that's easy, its because you haven't tried it. Trust me on that one!

As Abe says: Beliefs are nothing but thoughts that you keep thinking. And BELIEFS form our reality. The more emotion we put behind our thoughts/beliefs the more quickly they manifest. Both the 'good' and the 'bad.'

Thoughts are not just harmless little nebulous undefinable blobs that sort of just float through our minds. As the Buddha said: Thoughts are THINGS. They EACH contain the potential to actualize. On some levels, I believe most people know this; but we all need to take much more seriously. I'm not suggesting that we try to 'purify' our minds overnight, purging away all negative thoughts. Just pay more attention to 'where your mind is going' -- and it can be as simple as telling your mind "Thanks, but no thanks" to the thoughts that are making us miserable and creating more misery. I prefer to say "Thanks" because its a better choice than yelling "Damn you!" to your thoughts or yourself. We have to stay in a constant state of being willing to lighten up, forgive ourselves, brush ourselves off, and with a spirit of constant renewal -- go for that!!

We have got to believe positively when it comes to GUIDING our thoughts... Sometimes when one has worked their way into a totally black mood, its like pushing against a brick wall to eliminate it. BUT...we can...yup. We can. Even if its just beginning with 'this will end, I will feel better'... You have to like Abe says, work your way up the Emotional Scale... you can't jump from Black Mood to Silly Whacky Deleriously Happy... Take it easy on yourself. Loving and accepting ourselves brings more Love, Patience, Tolerance, and Allowing into the world. It DOES begin with us. Those rather strange monks who wear horsehair clothing and continuously beat themselves with whips are NOT bringing ANYTHING positive into the world.

The 2012 we experience, will, I believe, be what one WANTS it to be. As the wise man said: "Be careful what you wish for ...you may get it." We can't afford to visualize or wish destruction upon those we disagree with. That's the Phelps family way! Think about that. Wanting Peace has got to be more than just a 'nice thing to say.' So many of our own problems keep coming down to knowing we have to: Let It Go, Let It Go ... We must clean up our own thought processes, and then act upon what we KNOW keeps us aligned with Spirit, and... keep using that ol' broom in front of our own doorstep. Don't try to change others.

To me, this is what 'change' will be about in 2012.... there may be 'other events' that we observe. Some of it may be magnificently wonderful... some of it could be just the opposite... But it will be up to US as to whether or not we choose to participate. Like it is now--it will all be interpreted on an individual basis. The 2012 you experience may be entirely different than that of your neighbors. It's always up to the person we see reflected in the mirror. "Me" ... Don't expect anything or anyone else to 'change' in order to make your life the way you want it to be. Easier said than done?. Sure. But -- I have a good feeling it will be well worth the effort it takes!
Namaste' ....