The God of The Phelps...and the Westboro Church 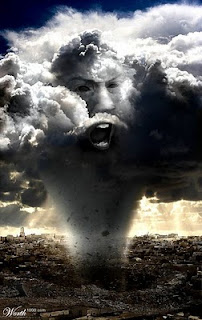 Does the God of the Phelps family from the Westboro Baptist Church in Topeka, Ks, actually exist?
Yes.
Shocked that I said so? It's all OK. Nothing to worry about. Unless you so choose to worry.

I grew up believing in that same kind of a wrathful, horrid, mean, punishing god. Satan, in comparison, actually seemed rather like a fairly decent guy! Perhaps there are some of you reading this who can relate. It's taken me much of this life to overcome what I know I chose to experience in this lifetime. Whether or not I was imbibing some kind of heavenly nectar when I planned for this...I am not sure.

To go from believing in a hateful, vengeful god to a 'god is love' fluffy-pink concept -- is like expecting to overcome a very embedded addiction in a day's time. Miracles DO happen...but overcoming a self-degrading, self-abasing concept of god takes time and effort and INTENT. And most of all -- "Awareness"...which means you are finally thinking ON YOUR OWN as opposed to responding to all the 'stuff' you have soaked up over the years because authority figures said "this is what you SHOULD believe." Your ultimate freedom involves being willing to focus on new and positive beliefs, especially when you have a lifetime filled with fear-reactions and responses saturating your mind and your psyche.
I heard a speaker once say: "As long as you believe you are a child of god... you will remain a child all your life and never grow spiritually."
So many people are so terrified of this biblical-torah-koran god that they are afraid to say or think any kind of thoughts that are outside of the narrow little box their mind has been encapsulated in.
Thinking of 'god' as ANY kind of entity...even the 'loving father with infinite patience' type entity, is to me, so SMALL its completely ludicrous. In light of the indescribable significance of all of LIFE... to try to contain this force into the word 'god' is even more ludicrous. Humans tend to visualize 'god' as superMAN.
It's so easy to revert back to fear and guilt-conditioned thinking. This is basically what ALL the major religions are about. You have to "be" a certain way in order to please or 'serve' this idea of god in order to be 'good.' Otherwise, you will burn in the everlasting fires of hell. The new more politically-religiously-correct version of god is a sort of hollow escape mechanism by which their god is totally nebulous and without any kind of mental substance. Guess that's part of the 'mysterious ways' eh?
What has happened with people like the Phelps family who first gained notoriety while parading their ugly protest signs in front of Matthew Shephard's parents the day of his funeral? (re: Your son will burn in hell...god hates fags, etc etc) They are the people who have become so saturated IN FEAR (even though it appears as self-righteous anger)...that they have literally become insane. I believe these people are representative of a dark side that is worse than senseless murders on the battlefields... ironically in both of these scenarios, each claims are following the will of god.
Human races and their gods and goddesses have come and gone. Through the many Ages some managed to find the Awareness that enabled them to realize that there is no god separate from what they are themselves. Hard to swallow if you believe you were born sinful, dirty, and unclean....and need to be 'saved.' But try telling that to a Christian, or a Jew, or a Muslim! Each "knows" they are right and will kill those who refuse to agree or cooperate.
What anyone claims or BELIEVES to be his 'god' is what he creates...and therefore, all of these 'gods' DO exist... Jesus hit it right on the button when he said It is ALL done unto you according to your beliefs. Granted, there are some 'truths' hidden (sometimes hidden very well!) in all of organized religions' rule books: Bible, Torah, and Koran...but they should NOT be taken literally, word for word.
We all know people who regard their god as a sort of self-appointed trained pit bull 'who will take care of all those sinners' as these religious people hide inside their shriveled little minds and pretend they are 'trusting god' to take care of all those bad people and situations. I guess its a bit like being protected by the Mafia (or the Phelps family

) if you happen to be a 'member in good standing.'
In some ways...people with UNobvious beliefs are worse. At least the Phelps are not worried about being 'politically correct!' Please do not take that the wrong way. I believe you know exactly what I mean! It is the enemy you canNOT identify that is the principle underlying cause of the bullying, the meanness, the painful suffering...which are often the unseen roots of prejudice and bigotry!
When one adheres to being metaphysical, one has to abandon all blames, all crutches, and stop being a victim. This includes those who claim to be victims and hide behind other people's shortcomings!
In some respects, "Creating Your Own Reality" is that point where what we call 'science and religion' can experience a common ground. Especially so in the field of Quantum Physics. Yes, there is a "higher power" but this higher power is nothing outside of us...it is something we all are a part of. To experience self-illumination or enlightenment...is to realize this. When we realize that we are all part of The One...the same 'force'... we intellectually ...and then spiritually...are able to Let Go of those old fear based concepts and religious dogmas... When we feel At One with ALL THAT IS...we will never harm, hurt, or injure anyone else...OR ourselves. Neither will we want to!
The Egyptians were wise enough to perceive that there is NO NAME for what people call 'god.' The minute we call 'it' by any name -- it immediately diminishes. We are spiritual beings playing a human game -- and we are finding our way back to this magnificent Source. When we self-realize our own 'god-hood' we recognize it's all grounded in Unconditional Love. To "serve god" is to honor and serve The Self. The "I AM." Some will understand that... some might perceive the polar opposite of what I said....and call it blasphemy. Well. Too bad.
Unconditional Love is best defined (thank you P's) as ALLOWING... ALLOWING everything... to be at peace ...and know you create your own reality just as others are creating theirs. Most religious teachings are aimed at keeping us from knowing we are ALL a part of All That Is and that we ALL have this tremendous ability to create our own reality.
In many ways... the new technologies are somewhat representative of the Inner Power I am talking about. It can be very difficult and challenging to understand...and easy to misuse... especially if one believes all the 'answers' are OUTSIDE of us -- and that we need to be obedient and subservient to those 'rules.' The only Law that exists, upon which all other Universal Laws are based, is the Law of Attraction. Sorry, Moses.
I guess I may seem 'unfair' to those religionists who are 'trying to be good people' ... but "I say unto you": (sorry couldn't resist..

)...until you understand the concept of WHY you are 'trying to be good' and WHO you are trying to please and WHY... its will continue to be a slow, rough road to travel. I am not 'blaming' people for being 'into' religion.
My own path was made up of 'trying out different churches/religions' while I was "desperately seeking to please God and find "the" Right Way" ... Finally, I believe my Intent paid off --It opened up my own mind to- and the potential of the Power within myself. I can always see and sense the fear in people who are scared to death of the god they are trying to 'obey' and please. Been there, done that. For so long.
In many ways, this is exactly what the Phelps family is trying to do. Their fear has taken them to the darkest part of the dark side. They are far more afraid of their god than the average "its Sunday better go to church today' type of a person who decides instead to go fishing or hiking or shopping, but 'knows' he isn't 'pleasing his god.' That's the sad part.
And my point is?

?? We all create...and/or accept beliefs. We also create what we call 'our God'... So many of our beliefs are so sadly dis-empowering because of all the fear and guilt conditioning attached to them. For all the people who are still so 'afraid of God' (including those who refuse to admit it) ... eventually we are all 'led to the Light that shines INSIDE of us...which is in our soul.'
I truly believe so many people...ARE...being led to this EnLIGHTenment... Intend and focus on believing that you will be led to the right teachings/teachers at the right time ... and you will. A lot of JOY and HARMONY and plenty of GOOD FEELINGS can accompany you on this journey! In fact, that's a good way to know you are on the right path...the one meant just for you.
Namaste'