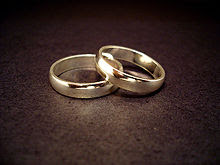 Oh MY...the controversy caused over the idea of gay marriage!! Since I have many gay friends I have found myself very emotionally involved in this drama, sometimes having to remind myself to not take anything too seriously. Naturally, I am 'for' it ...but not just for reasons one might think. I believe in the 'practicality' and fairness of allowing gay marriages with all legal benefits.

Some of the ideas surrounding "marriage" itself have SO much baggage tied to it... some of it totally ludicrous. Do I consider marriage a 'sacred' institution? No.... (there went a few readers!--whoosh! :

) The idea of marriage being sacred is relatively new in the history of the world...merely several thousand years old... The earth and humanity and 'marriage' have been around for multi-millions of years. The word marriage itself is a bit tricky to trace, but for all practical purpose I shall quote the French derivative: meaning mature enough for marriage ...or mariar: meaning ceremony of matrimony...(def: ceremony of the sufficiently mature)
Some might be surprised to know that 'same sex unions / marriages' ..have been around since ancient times, as recorded historically in Greece and Rome and even China. The Jews had a distinct influence on monogamous marriages, and later, Judaic law also influenced Christianity. The Catholic religion --simply could not make enough rules and regulations to direct every waking moment of every one's lives. Most of it done via fear of 'God's punishment" and backed up the invention of hell.
Prior to any kind of 'sacredness' surrounding marriage -- it was mainly about various sorts of social and/or financial 'arrangements' ...The woman (usually just a very young girl) got royally screwed over in SO many ways. She was property...period. She literally lost ALL rights. This even applied to some males.! "What's Love Got To Do With It" would have been a very apropos song for these 'arrangements.' This also held true for both monogamy and polygamy. Monogamous marriage is still rather 'new' to the world's history.
How a person wants to regard the subject of marriage should be their right -- their privilege -- If they want to uphold it as a 'sacred institution' ... fine. What they believe is their own business...BUT... when their personal beliefs infringe upon the rights of others -- that is quite another matter. When Christians start quoting what they 'believe' the bible and their god 'says'... and they enforce their beliefs into "Laws" which withholds other people from having the same privileges and rights as THEY do...then they are morally WRONG.
Laws are needed to protect the physical and mental well being of persons. How a marriage between gays and lesbians need effect the physical or mental well being of heterosexuals is strictly a self-imposed problem -- period. This is so simple to understand...but lack of understanding is CHOSEN by the ones who think 'my way or NO way' ... because "I" am right and 'my god' says so. Their idea of god is one that most of us have had to recover from to save our own sanity. However, I do not begrudge others the privilege of those beliefs -- as long as they do not infringe upon the rights and privileges of those who do NOT believe the same way.
Personally, not only do I uphold gay marriage, I couldn't give a tinker's damn if the laws permitted polygamy or even group marriages! How can it hurt ME??? Unless I choose to get all holier than thou and self-righteous and decide that I NEED others to believe as "I" do... (which is the basis for all wars, and we know all wars are actually religious wars....)
Funny how many Christians think their god needs defending. I am not including denominations such as the Religious Science Churches, Unity, Unitarian, and others who do NOT think 'our idea of god is the ONLY one'... I also realize there are Christians who do NOT feel it their 'duty' to condemn, judge, or damn to hell all those who disagree... However, you always have a few who toss their heads back in a haughty manner and utter "Its not up to ME...it's up to GOD to judge" ... those are the kind I really and truly want to smack.... but I get over it and then have to laugh at myself. I've gone through all the stages on my road to Freedom...(easy to forget sometimes!

) sigh...
I personally knew of a gay couple who had been together for over 20 years. When the one lay dying in a hospital bed, the staff refused to allow the partner to be with him because he wasn't legal 'family.'
When 7 our of 10 heterosexual marriages end in divorce -- what happened? The 'sacredness' wasn't enough to provide the glue to see them through rough times? Rush Limbaugh is now on his #4 'sacred marriage.' It's funny, in a way.
I don't particularly get warm fuzzy feelings with religion bashing ... but the truth is: the whole thing of being set against gay marriage IS STRICTLY ABOUT RELIGIOUS IDEAS!!
We need complete and total separation of church and state... however, I'm not sure it will ever happen. Most gays who want the privilege of marrying simply want the LEGAL RIGHTS that are afforded to straight marriages. And they should have those rights. Why would one say "NO" to this UNLESS one is relying on preset and determined notions of what their "GOD" is???
I wish I could enact a law (dream on...heh!) that would require everyone to listen to Graham Hancock who does a most excellent job of talking about "Who is Religion REALLY Serving" ... If one believes what he has to say or not is your choice -- and not my business -- but it DOES spin you around and make you THINK. And more people do need to start to thinking out of the box. All the resentment, hatred, violence, bigotry, and prejudice that has come about 'in the name of god and religion' is beyond shameful....and needs to be resolved with love, compassion and understanding.
In spite of it all, I do see a bright horizon where more and more people are waking up and realizing that god is not something outside of them ... but I won't say more than that ... to each his/her own way of learning on that path to Enlightenment and the Awakening and smelling the Divine Coffee!