The Government and Fostering of Dependency 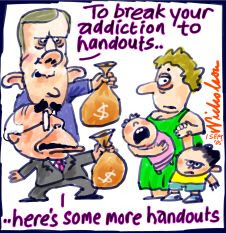 There is a fine line between helping and fostering dependency. I am neither a bleeding heart liberal -- nor a slave to the Protestant work ethic which is: if you don't earn it, you don't deserve it. I do believe that the U.S. has created a miserable mess when it comes to creating dependant mind sets for far too many of its citizens. We have far too many citizens who 'play the "I am entitled, you take care of me,you owe me"game.' Some do this brazenly without conscience. They know every trick in the book, every in and out of how to benefit from every 'entitlement program' that exists. Some of these Players earn twice (or more) as much money as I live on. Their attitude is: if it's there, I'll take advantage of it! So often ones who truly need assistance find it very difficult to obtain.

Yes, there are people who genuinely need help (government assistance) to survive. But --and I know this will piss some people off -- but I think the genuine needy...TRULY needy ones...are very much in the minority.

I know of people I call 'the Players' who get housing, food stamps, unemployment benefits, welfare of various kinds, aid to dependant children, etc etc -- who do not actually need any kind of assistance whatsoever. These Players could easily subsist on their own without government help. But 'as long as its there....' it becomes a game to them.

So what is it that makes people grab for anything --even though they don't need it -- just because its available? Some have learned from 'observation' -- the only thing they've known since they were children. Some are angry and have a twisted belief: 'the government owes me'... I don't think any of us reading this would want to trade places with those people. Judging them does no good...all it does is make us feel upset. You see...much of it is not really 100% their own fault. Many have been overtly or subliminally influenced to become dependant.

The government has its own reasons for making so many things so easily available! THEY WANT TO CREATE A DEPENDANT MINDSET nationwide.

Very seldom do you find a 'giver' who does not expect some kind of allegiance from the 'taker'. When Players turn over the responsibility for being taken care of by the government... they no longer feel the need to be responsible for themselves. Self-responsibility starts to diminish. This, however, does create a lot of inner conflict --and a common reaction (how I will solve that problem) is: I'll just stop thinking for myself. No need for me to own my own mind. I'll just let 'them' make all the rules that will serve and protect me. That's what the government is for! After all "I am entitled!!" ...Soon, a mixture of both resentment AND obligation begins to set in. People who 'sponge' off the government are NOT happy people. Don't kid yourself that they take 'pride' in what they are doing!! They do not. Please remember I am not talking about people who are genuinely in need of help.

In this country, 51% of all of our tax dollars goes to the military. It's too bad that THAT fact doesn't piss more people off! If we took even HALF of that -- 25%...and set up sufficient self-help programs to not only encourage but REQUIRE people to start assuming self-responsibility, we could change the Players around! If we would WAKE UP AND SEE that the government is CONNING US (cry TERRORIST!) into believing that we have to show up in every blasted country in the world and TAKE IT OVER to OUR way of thinking... we would eliminate the problems of what is now the half crazed Viet war veterans wandering the streets. ... oh but the VA gives them DRUGS to 'help' them cope....! Yeah, right...
There ARE a comparatively few programs set up to help people get back up on their feet again... and there ARE cases in which temporary help is genuinely needed. Health care? That area is run by the government's bedfellows: the AMA and Big Pharma. Together they are corporate money making projects. Health is hardly the prime object. We are #37 down on the world's list for availability in health care...Plus, the AMA and Big Pharma fight natural and alternative healing tooth and nail under the guise of "protecting us." Total bull crap. We all know the illegals have NO trouble getting health care--unlike some hard working person who cannot AFFORD it. But don't blame the illegals... Neither be so naive as to blame either particular political party, please....
The gap between the rich and poor in America is widening. This is what the government intends. We are fed such total, unimportant crap on the TV news that keeps us obsessed, upset...and DIVIDED. Anybody that thinks there is a real difference between Republicans and Democrats is truly brainwashed and mind-controlled. If that makes one angry -- well... that is the intention of the New World Order. Divide and conquer. Old technique. Still works well. NOTHING will 'change for the better' regardless of WHO is president or in control of Congress. If you've noticed, all Obama has done is carry on where Bush left off.
So many people have become SO dependant upon the government telling them what to do and how to do it. You don't think so? Are you not aware that the media mesmerizes us into thinking we 'need' this, can't do without that, and we must believe what they tell us! "It's for our own good!?" You don't think the government isn't in total control of all our 'sacred institutions' such as health, EDUCATION, and welfare. Government and Religion have always been a devoted Odd Couple.... Religion adding fear and guilt to the way we 'should' think.."serving God and Country" ... as if it were the same thing.
NOW!! The GOOD news: Not everyone is hypnotized. More and more and more people are WAKING UP everyday to what we have allowed to be done to us.... YES...ALLOWED! When one has Awakened to the Power Within, you have to give up Blame... and realize this is MY LIFE...MY MIND...and MY RESPONSIBILITY. Oh MY-- but what about those who need help??? Aren't we supposed to save the world??? Isn't it our responsibility to do that???
Until we Wake Up to what is really going on in the world, any effort will be like spitting against the wind. Yes, we can help others. But there is a HUGE difference between helping and ENABLING and creating a dependency. Ask yourself: what really feels good to you?? (I'm not talking anger or revenge!) ... but what actually makes you FEEL GOOD when you reach out to help an individual or an organization?? We don't help any cause by fighting against its opposition. We should do the thing that we know is right for US as individuals when we decide who and what to help. Taking care of ourselves is our number ONE obligation. If you know what I mean by that -- you have indeed Awakened and KNOW that I am NOT being uncaring. You do NOT save yourself by attempting to save others! That IS self-centered and self-righteous. One of the biggest favors we can do for ourselves is to stop allowing the media-programmed ideas to influence us...Drop them!...If we would stop focusing on and give our attention to all the media spin--maybe some of those problems wouldn't actually exist... We DO create our reality. Think about it. ...in an existential or metaphysical way.