The Rich. The Poor. The Republicans. The Democrats.

I'll confess that I try to avoid politics as must as possible...but it's impossibility to do so completely. Like so many other unpleasantries and even tragedies that take place, they just seem to find their way into your consciousness. Take American politics as a prime example. It has always seemed to me that the main, basic difference between Dems and the GOP has always centered around money...which includes the many varied ideas that are implied as to one's belief systems about money itself. Even as far back as the early '40's, my Dad used to say: The Republicans are for the Rich...and Democrats care for the Poor. 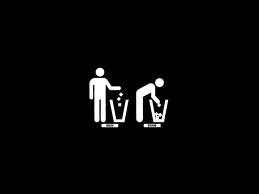 I know﻿ I am 'oversimplifying'...but oh well, most claims that either party make are overexaggerated --so it all evens out. This might mainly interest (if anybody! :) those who are not familiar with America's politics. In a nutshell -- the basic party difference: (biiiig nut)... The Republicans (GOP) accuse Democrats (Dems) of just handing out money, giving it away to those who have not 'earned it'. The Dems accuse the GOP of pandering to the rich and protecting all their interests. BOTH sides can come up with enough 'proof' as far as 'statistics' are concerned. So one might say that BOTH are "right" in their accusations. However, there is always more to the story than meets the eye....because BOTH claims are exaggerated....or just plain lied about.
And speaking of 'stories' ...we get many of our ideas and beliefs from (God help us) "the news"...which is all highly monitored by the Powers That Be. So actually we have so little right to draw ANY kind of conclusions concerning so many people, events, and situations beings most of it is based on 'what somebody else says.' So what I am speaking of..does...come from my own observations and deductions.
I grew up surrounded by people who were deeply immersed in "the Protestant work ethic"... which means if you don't EARN it...you don't DESERVE it. This was interpreted as "how you took responsibility for your life." Many people seemed to 'give to the poor' and be 'charitable'... It seemed to me, however, that their motive was "because this is what God expects" rather than because it is something they really wanted to do.
Even though NO ONE in our small Kansas community could actually be called rich... most people never went hungry. Everyone worked because everybody had the opportunity at having a job. Even in the ever-so-Christian community of little Lehigh, Kansas... you still had your 'classes' of people; based on things like who went to church every Sunday, who had to wear second hand clothes, and who smoke or drank. The commonality they all shared was being German. Germans are stubborn, tenacious, and hard-working...and irregardless if they were Lutheran or various brands of Mennonite, they were nearly all self-identified as Republican. Republicans, according to them, were God's people. Strictly believing that the Lord helps those who help themselves. My (adoptive) arrival into this community was somewhat akin to Little Black Sambo being delivered by a disoriented stork! But, I had enough family to accept me--all was 'fairly' well. :)
My Dad was a one of only several Democrats in our little town of 250. Talk about brave! I credit this to his being a Mason and meeting up and being friends with many others from 'the outside world' so he saw and experienced more of what was 'different' in other cultures. My Dad, even then, told me never to believe that those whom we elected to office were necessarily the ones running the country...and that the President was basically a figure head who either got blamed...or credited...for the decisions he made and for 'how the country was doing.' Or how we were TOLD it was doing.
The "Poor" back then, were like 'two kinds'. First, there were the ones you actually knew personally who were having a rough time (and were helped out by the churches or other organizations) ...and the others were actually "The Ones We Had No Idea About." I supposed I shouldn't forget 'the poor starving children in Europe' that we were constantly being reminded of to guilt us into eating everything on our plates. This other kind of "poor" were mainly the blacks, or some of the less accepted European races. The Oriental races pretty well stuck to themselves and could somehow survive in ways that would confound many economists and philosophers. The Native Americans got the rawest deals of all. Governmental 'help' was scarce....but!--growing!
And then!--- being formed for the Future was the purposely created class of 'poor' (or being PC:) "the financially disadvantaged"...Yes, purposely created. Purposely divided in many diversified ways, from 'the rest of society'...an intentional division that would have a real impact on people and their decision to be a Democrat...or...A Republican. And never has it been more outrageously evident as it is in the present time.