SCANNERS, THE GOVERNMENT, and FAITH AND TRUST 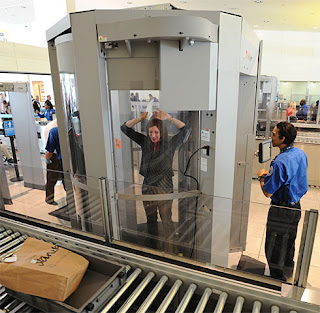 To me there is nothing even faintly amusing about a pat-down or a full body scan: the work of the TSA's...in airports. I know that humor is usually a good way of handling even some of the most desperate of situations... but this leaves me stone cold.
After talking with family members who have recently flown plus several other friends or acquaintances...I am resolved to never accept this 'safety precaution' as justifiable.
Most of you know I have very little faith in government...ANY government. I consider even the most 'likeable' political puppets having strings that are pulled by The Powers That Be.
Whether or not you agree or vehemently disagree with me (many of my friends simply see my views as a baseless quirk in my personality...and that's OK. :)
If you know anything whatsoever about programming, behavioral psychology, hypnosis, or mind control, you know those principles are fully applied to this latest "safety precaution against terrorism."
If you can convince people that the decisions that are made "are for their own good" ...they will bow down and not only comply but be 'thankful.'
If you Google what the latest polls say about scanning and pat downs you will find its six of one, half dozen of the other. This, too, undoubtedly done 'on purpose' to keep the majority of our fair citizens in a more deeply entrenched state of uncertainly and confusion.
I have encountered only ONE person in the last several days that agreed that these scanning safety precautions are a necessary evil because of the Bad Guys... you know that ever present 'they' ..the terrorists.
Most of you also know that I have my sincere doubts about what the news media fed the populous about the happenings of 9-ll. However, I am heartened by the fact that at least some people are confused as to what they 'really' believe.
As I have said many times before, far too many people listen to the news and soak it up as 'gospel truth' ...never, ever daring to think that anyone in authority could be purposely be feeding us a bunch of hogwash meant to keep us in FEAR.... FEAR....that is what all of this is about.
F.D.R. said "We have nothing to fear but fear itself"...the New Testament says "That which I have feared has come upon me." THAT is The Law of Attraction ... an immutable universal law... What you BELIEVE...what you focus upon...is what you get. As good ol' Flip Wilson (aka Gearldine) ((some of you remember!)) said "What you SEE is what you GET." "See" meaning the incredible power of your own imagination...which is by far stronger than 'knowledge.'
How many people believe they Create Their Own Reality? I don't know. Fox News hasn't done a poll on that yet... But I do know that many people choose not to believe it. Because if you did, you would have to go much deeper into your soul on an inward search than would be comfortable. Not believing in that universal law leaves one with the benefit of BLAME...one can blame everyone: beginning with your parents, your school, your church, your boss/job...and 'the sinful world' in general which includes of course...The MUSLIMS...which in many people's minds is the equivalent of the word terrorist. When I remind people that Christians have killed more of the world's population of the years than any other religion/peopole/groujp/community...etc ad infinitum...they just sort of shrug and avert their eyes and go "hmmm..yeah..."
So...these evasive, humiliating, degrading 'safety precautions' one is now forced to go through is because of Islam...or the Muslims... You know that is exactly the program being sold...and most people have swallowed it, hook, line, and sinker.
I am sure along about now...someone wants to yell at me: "You'll see"...the next time one of 'them' blows up a plane, building, etc, etc.." you'll see how wrong you were, Betty!"...and smirk at me with glee...

And who knows... maybe it will happen...but how do any of us know that it was really "them"? Because CNN said so?...maybe even the sancitified PBS news...? Could it be...just possibly be...that Christians, Jews, and Islam are all being 'played' for idiots...by TPTB... just to see if they can own our minds?
The Pleidians (there she goes again with that stuff, eh? :) told us many years ago, that as the year 2012 comes closer, the battle to own our own minds will be the most important battle we have ever fought.
What will be the true underlying CAUSE of some kind of disaster -- will be triggered by the mass consciousness of whoever is involving themselves... and each of us chooses, continuously, as to what part of mass consciousness we choose to align with.
There are a lot of 'them' and 'they's involved, aren't there?...but it all comes down to the individual and how each creates what will happen in their own individual world...
If we choose the route of peace and love...and "think upon those things" it is what will primarily manifest in our world.
As far as this article goes... its 'been awhile' since I have written one so animated, right? Right!

But I know that I must lay down the 'writing megaphone' and be extremely careful what I give my OWN focus to ... This, dear friends, is really about what all of us need to do. Pay attention...to what we 'believe'...and what we are 'thinking'...and TURN OFF THE NEWS. If you are meant to find out something that is critical to your life...trust that you will. Don't give your inner power away to those who would control your minds.
Faith and Trust... it always somes down to that.