The Usual To-Do Over the Nativity Scene....(here we go again..). 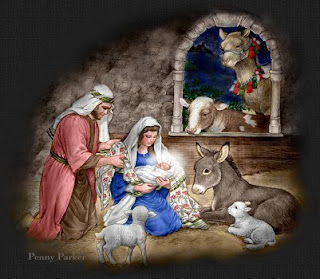 As per usual, there has been the predicted amount of fuss over the nativity scene in front of Denver's City and County Building.
Again, as per usual, the atheist community is rallying with their protest signs. A (new to me) group called The Organization for Logic and Reason has assumed the hefty expense of displaying huge billboards which say: Keep Religion Out of Government....
I'm for keeping religion and government separate...but, whether or not people can conceive of this or not... government and religion are enmeshed and intertwined in ways most people refuse to recognize.
Talk radio has promoted a lot of 'thinking' (and agitation) along the line of government vs religion. At times, it can be interesting, exasperating, annoying, and sometimes even maddening to listen to people's opinions about this controversial nativity scene... But, I, like everyone else, listen and hear things through my own filters...my own belief system. Here is the key: How willing am I too actually and sincerely ALLOW others to have belief systems that differ from mine"
On KHOW, 630 AM radio, Peter Boyles is someone one can both despise and appreciate...at the same time. He does an excellent job of pointing out the fact that the Christmas story is based on multi century old pagan holidays. Nearly ALL Christian holidays are pagan based. If one is acquainted with ancient mythology and the practices of the religions therein ...one can find common threads running throughout the vast majority of all myths. Most of these archaic stories include: A Holy Family; A Savior; A Trinity of sorts; and Life overcoming Death. Many contain varying degrees of sun worshipping...or one could say _SON_ worshipping. The Sun giving Light to the world...The Son giving Light to the world...etc etc etc.
Christianity is a comparatively young religion. So is Judaism if you choose to agree with the way some interpret the Old Testament. The roots of these fairly modern religious stories go back multi thousands of years long before Christianity, Judaism or Islam every existed.
I am not offended in the least by a nativity scene in front of a government building. I can appreciate the symbolism of the Nativity story without having to take it literally.
I don't see this as government 'promoting' Christianity. I would not care if they managed to hang an image of Mohamed flying through the air in a chariot. Neither would I care if a gigantic Star of David were hung amidst the stars across the top of the building. I would, however, think it very tacky if all these images and symbols got into a real competition with other!
To me, it is equally comical that avid anti-religionists think that simply by walking by and viewing a Nativity scene someone is going to be immediately immersed with a particular belief system.
To use the argument that Christmas, with all of its symbology, should be about "the true meaning of Christmas" is saying there is "only one way" that is correct. We will most likely always have to contend with good ol' Christian OR Muslim OR Jewish radicals / extremists. Thankfully there are the 'moderates' who don't look at this whole scenario with a life or death attitude.
WHY is it important that we all have to view 'what Christmas means to me' in the same exact way? The answer is!....(drum roll) because so many of our self-righteous ideas and beliefs are FEAR BASED. You must believe this or else... or else what?? "Well!!--Because God says so!" ... God. hmmm Now there is another concept open for interpretation. Here we go again on a subject where many religionists are, each in their OWN way, positive they have the corner on The Truth.
"Let There Be Peace on Earth, and let it begin with me" ... Ah, yes...
(and please, God, make everybody see everything my way so we all can have peace...) etc etc etc ...
It really does help to have a sense of humor.