Do We Need to Take Sides??? 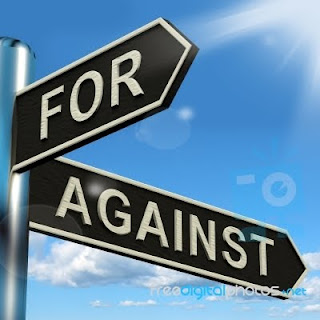 With so much division and derision and indecision going on -- not only in the U.S. but all over the world-- there are times I just want to say "Just shut up ... all of you!...I don't want to hear anymore from ANY of you."

So many people are wanting you to 'take sides.' Their argument is based on: you are either FOR me, it, or them... or ...you are AGAINST me, it, or them. Without going into a lot of psycho-babble, I think their desperate need to be agreed with comes from a feeling of insecurity and uncertainty about what they claim to 'believe' in.

If you decide 'not to take sides' you most likely will be considered weak, lacking in character and/or conviction...or...accused of not having the insight or intelligence to see 'what is really going on.' You have to take a stand!! If you don't -- you are most generally branded as uninformed...and most definately thought of as uncaring: you don't care enough about your fellow human beings to 'do something about it!'

I have experienced 'my day as an activist' ... so it's not as if I haven't 'been there, done that.' However, things were less hateful when I was doing my own thing, in spite of insolated riotous incidents that plunged the media into a frenzy.

I have friends who are activists now. They have 'level heads' as the saying goes. I admire that. They enjoy doing what they are doing. Therein, to me, lies the 'pivotal point.' If one is motivated by hate and getting off on 'putting the other guy down' or angrily winning arguments... one is actually fighting against what one wants to see.

Winning a physical or oratorical fight by squashing the opponent is FAR easier than teaching by example.

It seems to me that I see, hear, and read of many people who know what they are AGAINST ... but they don't know 'what in the world' they are FOR. It's easy to quickly say (scream!) "Equality! Equal Rights!" ... but when you ask them to detail what they are talking about, more reflective thinking is required. Simply saying "Well, I should be able to say and do just exactly what he or she gets to say and do." And they want LAWS to make sure they are able to attain those sometimes nebulous sounding privileges, while at the same time complaining about 'too much government and too many laws.'

Right now, the main topic that underlines this 'for or against' business is the upcoming Presidential election. It's like __all of our individual successes depend, totally and completely, upon specific 'outside' factors.__It all depends upon: who wins the presidency in November. That is totally and completely ludicrous!

Granted, it is difficult, if not 'almost impossible' (forgive the oxymoron) to not feel or have certain inclinations towards opposite 'sides.' Our thinking and reactions have been so programmed from toddlerhood...that to claim otherwise would be blatant denial. But...a biiiig but here, once again... if we are not able to step back and observe our thinking, feelings, and reactions, it means: we are not truly owning our own minds.

Those of us who know we Create Our Own Reality - have to remind ourselves (sometimes quite often) that we cannot point fingers of blame on those in office, or upon those 'unfair' rules and regulations, upon 'the radical Right religionists, (religion of ANY kind) upon the bigots, or the war or hate mongers. It doesn't mean you have to like or agree with them, or do anything to encourage them. But to 'fight against' with violence, or the same kind of hateful energy...means losing...every time. The Left can be JUST as self-righteous as the Right.

I grew up in a community in which we had Conscientious Objectors. They would not fight in a war. They were made fun of, called Cowardly Objectors, there only contribution to the 'war effort' was cleaning bedpans in military hospitals. I would hear: 'The REAL soldiers' who serve 'god and country' have to fight for THEIR freedom. I definately overcame that thinking.

Our government -- with all its mess and coruption--is a reflection of what WE, as Americans have allowed it to become by handing over our Inner Power to the corporate heads, politicans, and ne'er do goods...and yes, this includes the world's Ruling Religions who have shut down minds to the point we lost critical thinking skills. Sorry if that offends. (actually, I'm not...:) What has hurt us, more than helped us is this so called 'political correctness.' It has elevated victimhood to a new (and untouchable) level. I know I am treading on very touchy, very volatile ground.

As much as people claim Ghandi to be a hero and admire his peaceful, non-violent principles, many of them are just blowing (but very pious sounding) hot air. Back in the '60's, many people became disenchanted with organized religion and found Buddhism appealing... however, very few actually applied the principals of Buddhist philosophy to their own lives. Especially the teachings of non-violence (in word and deed), compassion, and _detachment_ .

I am not holding myself up as some pure, blameless, shining example of what I honestly DO believe needs to be done... but even though I fall, I get up, and proceed again on the path. This I believe: We could turn this country...we ALL could turn this WORLD... into one that is loving and 'fair' for all ... if we would stop the violence and the fighting (not just in the middle East but between political parties!) in our MINDS!-- and detach from thinking that "WE are the ones in the right!!...isn't that evident!!" ... We are so busy JUSTIFYING our beliefs there is no room for love or compassion -- although we CLAIM that is what we are 'fighting' for!

I know people of color, gay people, women, the handicapped, and people who adhere to controversial philosophies, poor people (and even rich people :) ... who CHOOSE to ignore what insults may be hurled at them and consequently are leading everyday, average, pleasant enough lives without 'fighting against the system.' That is a LOT harder to do!!! They have learned all about The Law of Attraction. I also have activist friends who are truly loving people who are simply enjoying, inwardly, helping other people, without calling attention to themselves. I'm all for peaceful protests!

In the end, we learn we can NOT 'save' others. But we CAN look inward, and with peacful intentions, know what feels GOOD...a peacful kind of GOOD... and live our own lives in a way that we 'know' we need to do. That is a spiritual knowing....and cannot be 'enacted into human law.' :)