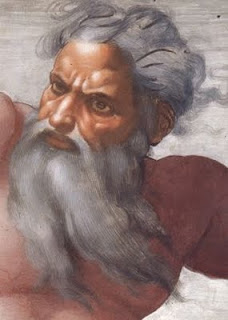 No. It was not only George W Bush who claims God spoke to him. Many people do this on a regular basis.

This picture to the left, is one of my favorite pictures of God because it does, indeed, seem to portray the concept of what many call God: looking very pissed off and ready to throw lightning bolts; keeping 'his children' in fear of dying and going to hell. In spite of the 60's and 70's attempts to portray and nicer, more user-friendly God, with aphorisms such as "God is love" ...I'm not sure how well this new and improved concept 'took.' Then again, some folk seem to like the idea of a mean and punishing God. It's their 'weapon.' They are the 'experts' on God.

Many scoff at people who claim to have personal channeling's from God. Even Republicans chuckled at George W's claims... Still...many delight in using Bible quotes to supposedly prove their own points... They are certain they know what God says, wants, or does. I suppose this is understandable in light of certain religious teachings that were embedded into them from early childhood on.

I am not sure where humanity, as a whole, ranks on the evolutionary scale...(which I am simply identifying as humanity crawling out of their little boxes and not being afraid to QUESTION what they have been taught.) When it comes to religious teachings and dogma, most adherents have been taught NOT to question. Questioning, however innocently, putting themselves in danger of God's wrath.

Some people actually believe the world is only 6000 years old. They refuse to entertain the scientific fact that Earth is millions of years old and that a plethora of religions have come and gone. Currently popular on Earth is monotheism which means 'worship of one God' -- and there is little wiggle room for any belief system that doesn't support that belief. To many, the concept of this one God is most generally seen as some supreme ruler/creator that exists separately --outside of all that 'he' has created.

God, to them, or Allah to Muslims, is usually thought of as a gigantic super-human, an all powerful and knowing entity.. perhaps because it is the best they can do with their finite thought processes. He (always male) is a very exacting monarch that you dare not defy...or else. He has human characteristics, the same of which are considered to be very flawed traits in humans. It is indeed, a fortunate religious-adherent that has not been raised with Fear and Guilt Conditioning in order to overcome 'lowliness, unworthiness, and the need of being saved.' I admit that I am 'stereotyping' religion here... however, I feel this is somewhat justified and counter-balanced by the fact that far too many religionists feel it is their right to HURT and HARM other humans -- not only their 'right' but their Christian or Muslim duty!! They actually believe: "God wants them to~!!"

Those people have every right to their beliefs. Yes. They DO have the "right" to their beliefs -- But I do not believe that ANY belief or religious teachings should give ANY one permission to HURT or HARM others in any way -- be it physically, verbally, mentally, or emotionally.

I really like the Wiccan Rede (pagan based religion) of Do As Ye Please but Harm No One. (which includes yourself)...that covers more territory than many uninformed critics of earthen religions are willing to allow.

When anyone takes action--verbally or physically (via the "Law" or not) to DIS-allow others their own beliefs and rights--even if they are 'quoting God, their particular scriptures, or religious dogma' -- they are committing the ONE sin that goes against any and all moral philosophy: Harming Others. In any way. This includes dis-allowing privileges of any and all kinds because of one's interpretation of "what God is" spouting their endless quotes to 'prove their points.'

I get equally (well...almost...) annoyed at the 'victims' who are being 'condemned' when they try to get into the same twisted playing field in order to argue and counter against those who oppose them. WHY??

Why should gays or anyone who is considered 'different' --have to 'use scripture' to 'prove' that this limited 'image of God' loves them, too?? Why should anybody have to defend their race, their language, the way they dress, the way they walk, the technology they use, their lifestyle, the area they live, they way they do or don't spend money, if or not they work or 'live off the system?' Now...here is the 'zinger!' ... there is NO NEED to defend yourself (or even counter with quotes from holy books). If you feel you have to use the same material to pose your OWN arguments -- it is like saying 'your argument is valid therefore I have to use your same material...' Think about it!!

WHY should you feel you have to 'present valid arguments' against those who are judging you?? If you DO ...it means one of two things: either you are not following your own Inner Guidance...or... you are living your life with the need of approval from 'others.'

So then its up to us, individually, to do what is right for ourselves, and blank everyone else.

I am not a religionist by any means (been there, done that...) but I do consider myself spiritual... which means expanding one's consciousness and honoring oneself, and allowing others their beliefs without getting our knickers all twisted in a knot. Let 'them' do that if they so choose. It does not have to effect US -- unless we so choose.

So much of this all comes down to what kind of image one conjurs up upon hearing the word "God." Herein lies the religionists' reason for using Fear and Guilt conditioning to tell people what is 'right and wrong' and how to live their lives. The more 'human' their God is ... the more judgemental they are. Why does anyone feel the need to defend against that!!?

So far I have had a very 'busy' lifetime this go-round. I have no problems admitting that I have been 'guilty' of nearly every kind of 'narrow-mindedness' that exists, including one who thought "Ha! God's gonna get you for that`!" But I never have quit seeking and searching for answers even in 'dangerous territory'... To be on the Leading Edge, we HAVE TO take chances and question -- and confront -- even defy -- all those things which intimidate us and just plain make us feel badly ... We have to stop heeding everyone ELSE's ideas of right or wrong...and trust our OWN validity, our OWN spirituality, our OWN Inner Guidance, and our OWN Life...

The ancient Egyptians had it right: There is NO NAME /WORD (including 'god') for that source, that force that is ALL THERE IS... even the name 'god' is limiting... We are each a part of this Source, this All That Is... and its time we recognized our OWN Inner Power.

I truly like the way Neale Donald Walsh (author of Conversations With God) describes God:

Since we can't -- nor is it up to us -- change anyone's views on what they call God ... we CAN be charge of our own thoughts -- our own reactions -- and our own lives. This must be done without harming others ... otherwise what is the difference between 'them and us?' The more expanded our own consciousness, the greater is our capacity to LOVE and LIVE, and to allow others their own beliefs without it effecting us ... one single bit... Now that spells Relief!!