The Three Little Pigs, The Big Bad Wolf, and THE FLU.... 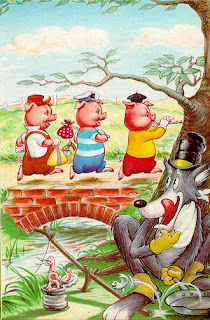 The Fear Mongers are at it again. If it wasn't bad enough to worry about the economy...we now have the Swine flu added to the mix.
The Swine flu is supposedly a combination of swine flu, bird flu, and human (what the hell--human???) flu

... Most astute bloggers who have great influence and 'backing' to the tales they spin say that to trace the origins of this new and improved flu strain, can be traced back to laboratories. Who knows. Maybe the same one where AIDS was created and unleashed.
Now if you "believe" in the government and media... you might have already clicked off this site. That's OK... But even if we disagree about possible origins of this flu... I hope you will at least consider the effect that FEAR has on your life. Even if you have grave misgivings about "Questioning Authority" especially when it comes to your chosen political party...please just for a few moments entertain what normally strikes you as absurd. OK? OK! Good. You are very brave.

I have never SEEN such a monumental effort by the media to put the masses into a state of not just 'regular fear' that so many have adjusted to ... but now the imminent fear of death lurking with the what seemed to be the 'sudden appearance' of this flu.
I'm just going to ask you to consider the 'truth' or 'authenticity' of all that you have been bombarded with lately. Even though you might consider them outrageously ridiculous. Here goes!`` with these 'ludicrous statements"...
1.) How do we know for sure that ANYone has died of this so called 'new' swine flu? Do you believe everything you read?
2.) Have you ever studied the philosophical concept of "fear" and how our 'trusted' illustrious leaders use this emotion to control the masses? When a type of promoted fear is present ... reason and creative thinking go out the window and the masses look to be 'saved.'
3.) Have you ever considered that A New World Order is well under way but that its leaders are really bugged by the world's over-population? And that IF indeed this flu is 'real'... it might serve a means to an end. Take a good look at the humongous death rate in Africa...and give me a good reason why no effort is made to restore these people's health (aside from small private groups)...
4.) Are you going to be clamoring to get a 'flu shot' ... even though completely contradictory information has been published about the 'effectiveness' of Tamiflu. Nearly everyone I know got the flu after having the Tamiflu flu shot...and that was just 'human flu'

... Do you really trust what is in those vaccines?
5.) Don't like anything that smacks of conspiracy? Well. OK. Do you believe at ALL in the Law of Attraction...? ...or the Bible? "That which I have feared has come upon me." ... Or have you read anything at all about the effect of fear on the human body's immune system?
6.) Do you think this flu is the result of bio-terrorists? It may well be, but I would encourage you to expand your list of Uusual Suspects....
7.) And before some of you think I have completely abandoned my metaphysical thinking ...I haven't!

Even though I may observe and write/talk about many different kinds of outward manifestations...I know that those outward manifestations are either the direct--or indirect--result of what is happening within each individuals's psyche... or the psyche of the mass consciousness...be it our own country or the world at large.
IF....this flu actually DOES become the dreaded 'pandemic' ... it will not be the flu virus itself that will do the killing through its own volition ... it will be the FEAR motivated belief-in-this-flu that will extend the invitation to welcome it, inidividually, into a person's life...perhaps even spreading to the masses. Abe explains it best: We either create deliberately ...OR.... we create by default ...which is when we UNconsciously create by going into automatic overdrive... unawake and unaware (in 3D reality) and then the ever present Law of Attraction simply is drawn to and uses one's strongest beliefs and inevitably delivers the manifestations.
In the meantime... try not to PANic about the PANdemic.... This all will prove to be a good chance for us to practice eliminating some beliefs that are not serving us well and giving Ye Olde Faith and Trust a whirl... Don't give your power away to outward manifestations. NO ONE can do ANYthing to us that, on some level, we do not allow!
Really, all is well. Hey...you might not like that I say this...but at 'worst'...we die